An Artist of the Floating World, by Kazuo Ishiguro, is a beautiful, hazy portrait of life in post war Japan. It explores generational tension, changing social mores, guilt and atonement. It is also another excellent example of the unreliable narrator, a trope of Ishiguro’s work. Early on, Ono explains that no artist can paint an honest self-portrait.

Masuji Ono is an unreliable narrator and one who rewrites his past. Like the character Etsuko in A Pale View of Hills, there is a tension and darkness underlying seemingly banal memories. A refashioning, expanding the small acts of kindness he engages in. While papering over and minimising his great cruelties.

Etsuko in a Pale View of Hills portrays herself as a submissive, traditional housewife. When in fact, she is a cruel, narcissistic sociopath who likely caused her own daughter’s suicide.

Equally, Masuji Ono paints himself as a mild, unassuming artist with no sense of his own importance. One who made a mild error in the war that led to him painting Imperialistic posters. Yet read between the lines and he is, in fact, an arrogant, self-aggrandising man. He preens under (obviously) false praise and commits terrible betrayals.

He is utterly baffled about why one character will not speak to him. The reasons would be clear to anyone with any self awareness or sense. 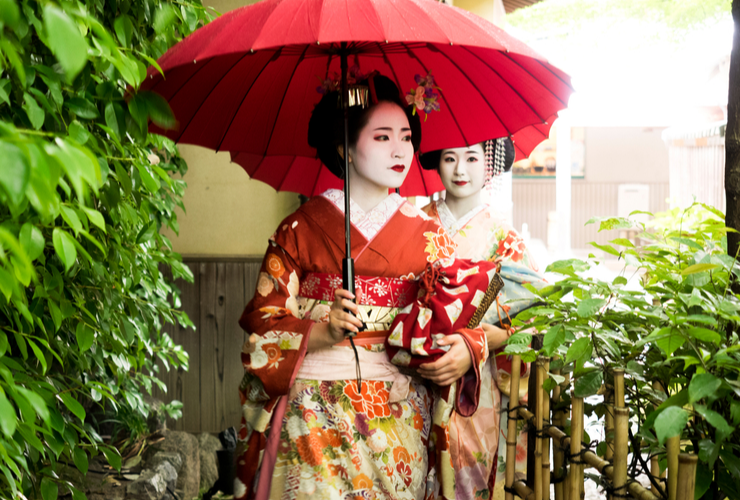 “What people call the floating world, Ono, was a world Gisaburo knew how to value.” – Mori-San

The title refers to both a style of artwork, Ukiyo, and a lifestyle focused on the ‘pleasure districts’. These areas were home to Geisha, courtesans, kabuki and puppet theatres, teahouses, fashion boutiques, and festivals. The word had connotations of being transitory, of the moment. Capturing a transgressive, bohemian lifestyle. Something like 19th century Paris.

The advent of WW2 led to a disdain for frivolity, decadence, pleasure – everything the Floating World symbolised. Even the high class and sophisticated Geisha struggled with declining income during the war. By 1944, the pleasure districts were closed. The Geisha either found employment through connections or were pressed into factory service.

It is possible Ono changes due to sincere distaste for excess. Or he is simply astute and sees where tastes are turning. There could also be a leftover feeling from his father’s disdain for art. His attempt to prove that art can be a masculine, useful profession.

Ono’s favoured local pleasure district was for the soldier, the right-wing Imperialist. It was more a group of bars than a real Floating World. Still a place to drink and relax, but centred around a militaristic, Imperial aesthetic. So, it remained acceptable to the Emperor and his Committees.

After the war, Ono’s Imperial pleasure district deteriorates. It is implied that its decay is deliberate and politically motivated. He talks of demolition by government, not Allied bombs.

“It is perhaps as well that that little world has passed away and will not be returning.” – Masuji Ono Post war the Emperor lost all political and military power, and was made a symbol of the state. Universal suffrage was introduced and human rights were guaranteed. There was a relentless shedding of the past. Taverns torn down; men encouraged to kill themselves to atone for the sins of the Empire. There was also a great deal of hostility from the younger generation to the older.
Ono portrays the contempt from his son in law as an understandable trauma response to the horrors of war. Yet the man’s antipathy is entirely explicable. Ono’s propaganda led men like him to their deaths, and his collaboration led young men to be tortured. He has an understandable fury toward the older generation; a similar fury was evident in post WW1 men.
There are multiple moments of inter-generational betrayal in the book. His father burned his paintings after scorning art as an effeminate pursuit. His mentor Mori-San, (a kind of Japanese Toulouse Lautrec) considered his forays into independence a betrayal, and proceeded to destroy his work and exile him. Later, when one of his own students breaks from his influence, he does not just destroy the man’s work but his life.
The character of Ichiro, Ono’s grandchild is another example of this tension. I initially interpreted Ichiro literally, as a nasty, spoilt child with a streak of misogyny encouraged by his grandfather. I should have looked at his behaviour symbolically. He disrespects his elders; adores cowboys; speaks garbled English; demands to see a modern film which frightens him. He’s a cultural symbol of breakaway pro-American sentiment in post war Japan, and changing attitudes which have reduced respect towards elders. 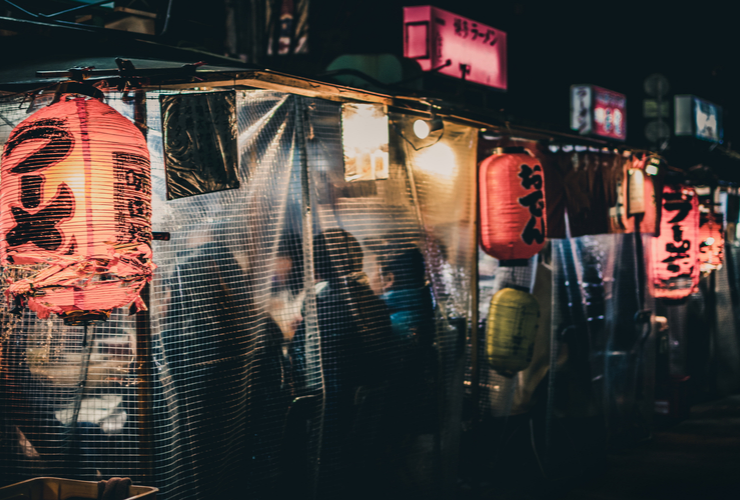 “An aspiring artist, young Ono began as a hack artist, then became the star pupil in a school of bohemian artists who enjoyed and celebrated bars and sake, hostesses and lantern light.” – NY TIMES

There is the clear sense that Ono’s reputation has waned over the years, likely due to his Imperial connections.

He recalls drinking in the Migda-Hidari with his finest pupils. Now he drinks in a comforting but far smaller environment with a former pupil who he classes as ‘not first rate’, who now illustrates books. He describes the man as being un-cynical and naive. Which is perhaps why he continues to associate with Ono. He talks of the ‘exaggerated respect’ he had from his students. Perhaps this is due to cultural differences I don’t understand, but it does indeed seem exaggerated; false even.

One plot point is that his daughter Noriko’s marriage negotiations fell through. his two daughters suspect it was due to Ono’s actions during the war. His daughter gains a new suitor. Ono claims to know the man’s father, Dr Saito well; the doctor claims never to have met him. My impression was that Dr. Saito liked and appreciated his work before the war, and was pretending not to know him out of courtesy later due to the potential negative associations.

“Brave young men die for stupid causes, and the real culprits are still with us.” – p58

The novel explores being held accountable, taking responsibility and whether guilt is warranted.

Both he and his daughter Setsuko (although she does so to prevent an honour suicide) minimise the effect of his wartime activities. An act which seems reasonable – after all, wasn’t Ono just a low level propaganda artist?

Until he briefly let’s slip that he betrayed one of his pupils to the secret police. The man was imprisoned and tortured, and probably wasn’t the only victim of Ono’s denunciations.

That association – of informant, of collaborator, explains his guilt. And explains other people’s barely concealed hostility toward the seemingly mild and inoffensive man.

It has a parallel sense in our current culture. There is a sense that something is deeply wrong in society. Marginalised groups have begun to gain some small measure of equality. There is a need to hold powerful people accountable when they do wrong. A need that sometimes spills over into (online) mobbing, and a backlash against ‘cancel culture’. But what if, like Ono, the ‘victim’ of societal disapproval isn’t being ostracised for minor offences? How should a society handle a man who set someone up to be tortured?

What atonement would be enough?

Throughout the book, Ono dwells on the suicides of other men.

He recalls a rather odd conversation with his daughter’s erstwhile fiancée, Jiro Miyake. The other man relays that the president of their company has committed suicide. Miyake says this was a great relief and means they can all move forward. He also says, “Sometimes I think there are many who should be giving their lives in apology who are too cowardly to face up to their responsibilities.” Although Ono wonders if the conversation took place the way he remembers. Indeed, for a man who is described as lower status, nervous and mild mannered, it would be an oddly pointed thing to say.

(It seems more plausible that the mis-remembered conversation was his conscience needling him).

Japanese culture has a long history of suicide, especially when tied to military defeat. Taking one’s life was considered more heroic than defeat. It has even been seen as a morally responsible action. As Ono’s propaganda led men to join the army and to their deaths, and his direct action led to imprisonment of others, it could be plausible that he would be encouraged to commit suicide in atonement.

Ono is also retired; the elderly and retired in Japan are even now at great risk of suicide due to the focus on work as purpose.

Additionally, the ‘Hesitation Bridge’, highlighted at the beginning of the book, is a clearly symbolic suicide landmark.

A major problem I have with Ishiguro is that when I read his work I’m fascinated and, often, baffled. I don’t so much want to write a book review as a psychological profile.

I want to explore the socio-political context and the multiple layers of metaphor. Reading his work is not so much like unravelling an onion as biting into one.

Yet his works are beautiful, tender. Like Morrison, close to poetry. They are also typically, wonderful portraits of flawed human beings. Often, actually, terrible human beings. It is only when you reach the end of the novel that you realise Ono was, in effect, a war criminal. That reminder that even the worst flavour of person, is, in fact, still human, can be jarring but necessary.

I recommend you read it. Ideally more than once. Just perhaps don’t expect to understand it.

View all posts by thecharcoalslate

2 thoughts on “An Artist of the Floating World, by Kazuo Ishiguru”